“It was a fantastic feeling. I worked hard for this, I deserved this opportunity and I am very happy with my 1st goal in the Champions League. However, the most important thing was the team’s win in a very difficult match. I’m very happy that we got the 3 points.”

“We were consistently defensive in the 1st half. We scored a goal and had a chance that we could have done better with. In the 2nd half, Olympiakos were stronger and played to earn a draw, but we were able to defend safely.”

“We continued adjusting throughout the match to provide defensive consistency and be more dangerous in attack, as we were a little far from their goal. The substitutes worked well, we got the 2nd goal deservedly and the result is fair.”

“We lost because details.We had a large part of the possession of the ball, many chances, but we didn’t score and Porto were better in both of the chances they had on our goal. The team did very well with the ball but, without it, details were missing.”

“At Champions League level, such mistakes as the ones we committed to allow the 2 goals are not allowed. We were better than Porto in the period between the 2 goals but we didn’t convert our chances. It demonstrated once again that details will decide the group.”

When I made the substitutions, I wanted to provide the team with fresh legs, more depth and pace on the wings. We risked bringing in newcomers in order to get the draw, but it wasn’t meant to be.”

André Silva gets @eintracht_eng on the board early with the header. 🔥

Only Robert Lewandowski (26) has scored more Bundesliga goals than André Silva this season (19). 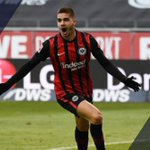 ⏰ 9’ — @andrevsilva19 heads home his 19th of the @Bundesliga_EN season and gives the Eagles an early lead! 🤠 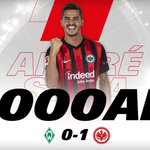