Sporting CP is guaranteed at least 60 million euros for Bruno Fernandes from Manchester United. All that is left to work out is bonuses and what players, whether it be loan or permanent, will go from United to Sporting, per a report by the sports daily Record.

Sporting have wanted 70 million euros for Bruno, but if a deal is worked out on a bonus structure Sporting may benefit even more.

Bruno to United has been one of the most written up news stories in Portugal and England since last summer, and has yet to happen officially.

But reports of Ole Gunnar Solskjær scouting Bruno personally, along with Sporting boss Varandas making a recent trip to London, have reignited the stories.

Bruno has single-handledly carried Sporting CP and if he does in fact leave, it will be a major challange to the team’s ability to score. However, the sale is expected to help the club financially and also help them enter the market seeking new players.

A Bola: #SportingCP Bruno Fernandes deal to United is imminent and could happen today or tomorrow. The deal is €60M+€10 paid later. The question is will he be available for the Derby. Bruno is not being used in any promotion for next Week’s League Cup Final 4 matches.

🆕 - Pizzi has been directly involved in 17 goal-ending open play sequences in the Primeira Liga this season; the most of any midfielder. Architect. 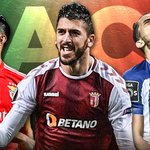 O Jogo: #LigaNOS Despite some calls by teams to have some fans at matches, 🇵🇹Secretary for Youth & Sport says there will be none this current season set to resume.

O Jogo: #FCPorto will soon resume playing 80 days after their last match on March 7. Conceição will oversee today the last of 24 mini-preseason training sessions before they play tomorrow night at Famalicão.

Portugal's Primeira Liga restarts on Wednesday in unusual conditions after the novel coronavirus stoppage but with a familiar feel as the ...
View on Facebook
·Share

Europe’s 30 richest football clubs are only getting richer, according to a new analysis of enterprise value by Big Four accounting and advisory firm KPMG.
View on Facebook
·Share