Sérgio Conceição hosted the pre-match press conference in Olival ahead of Sunday’s Week 33 Liga NOS match at Madeira against Nacional.

Although Porto is among the Liga leaders and Nacional towards the bottom, each team needs the 3 points to maintain their objectives, which in Porto’s case is keeping close to Benfica and Nacional trying to avoid relegation.

Brahimi (abductor) is a confirmed absence for the trip. Herrera is out due to suspension, but will still accompany the team for support.

“It’s traditionally a difficult pitch and we have to be prepared for it and go to Madeira to win the 3 points. We know they need points and it’s a final for both teams. Pressure? In a big club there is always pressure every match we play and this is perfectly natural.”

“All players are different from each other. He (Herrera) has an important role in what I want for the team, but there will be another player that will change some of our dynamics. I never complain about absences, for example, our best scorer has been out almost all season.”

“It’s difficult, but not impossible. We have to go in search of these next 6 points, whoever it is against. This week we had examples of teams that were nearly eliminated, but in the end advanced to the next big round. We will play a champion, a very strong team, but at least we will have the dignity and the panache of wanting to fight for the 3 points.”

Not many bigger & fiercer rivalries than Sporting & Benfica. In this youth game the ref incorrectly gives a penalty for handball. However, the player from Sporting who was awarded the pen tells him it hit their face. The ref changes his decision. It was 0-0 at the time. #Fairplay 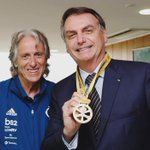 A Bola: #SportingCP Acuna is an option for Thursday's match. He still has some pain but wants to play against Basaksehir. Palhinha will return next season. He is currently on loan at #SCBraga.

#Benfica wants to also win in e-sport. There are talks with Brazilian Zezinho. ... See MoreSee Less

Record: #SportingCP will maintain Ristovski with a renewal for 2 more years. Sporar seeks to end the drought. He has attempted 6 shots in the last 4 matches.

#Benfica Florentino could recover his spot in the XI.

O Jogo: #FCPorto Otavio is suspended for Thursday's Europa match x Leverkusen. Danilo could get the opportunity to get back into the XI.

#SportingCP Acuna has trained without limitations and is an option for Thursday's Europa match x Basaksehir. ... See MoreSee Less